Add some freshness and positivity to your room decor with these yellow room decor ideas.

Get ready to see yellow rooms all over the internet, from bright lemon yellow to honey hues. Don't be scared and add this invigorating shade to your home decor for a burst of sunshine and energy. At LANGRIA, we have compiled our favorite yellow room inspiration home decors, but first, let's dig in in the meaning of the color yellow. Yellow is associated with joy, happiness, and energy, and it is the color of sunshine. However, it has a double meaning. On the one hand, it is a cheerful and optimistic color that brings freshness to one's life. On the other side, it is said to also represent jealousy and deceit. (Learn more about the meaning of the color yellow ) We like to focus on the positive, as it weighs more than the negative meaning of this color. Yellow produces a warming effect, stimulates the mental activity and it is a cheerful color -that is why many kid's toys use this color.

"A splash of yellow adds warmth and life to a room, even if it's something as simple as a small vase of yellow flowers." Judith Balis.

And now, our top 15 yellow room decor and accents that will bring positive energy to your home.

Pale, sweet, boring, washed-out, childish... Many people believe that pastel tones are only suitable for kids' rooms. This color hue is peaceful and has the ability to make rooms look larger. The good thing about pastel tones is that you don't have to limit yourself to a palette of colors. You can mix several pastel tones and still end up with harmonious uplifting results. [caption id="" align="aligncenter" width="564"] 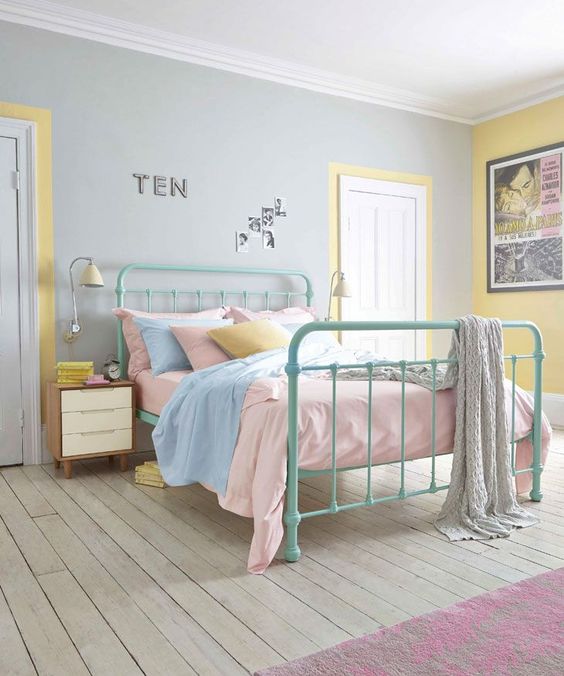 source: Pinterest[/caption] Isn't that bedroom flowing calmness? Mix several pastel colors for a serene retro vibe for your bedroom. The result is a grown-up bedroom, a bit quirky yet not completely childish. [caption id="" align="aligncenter" width="540"] 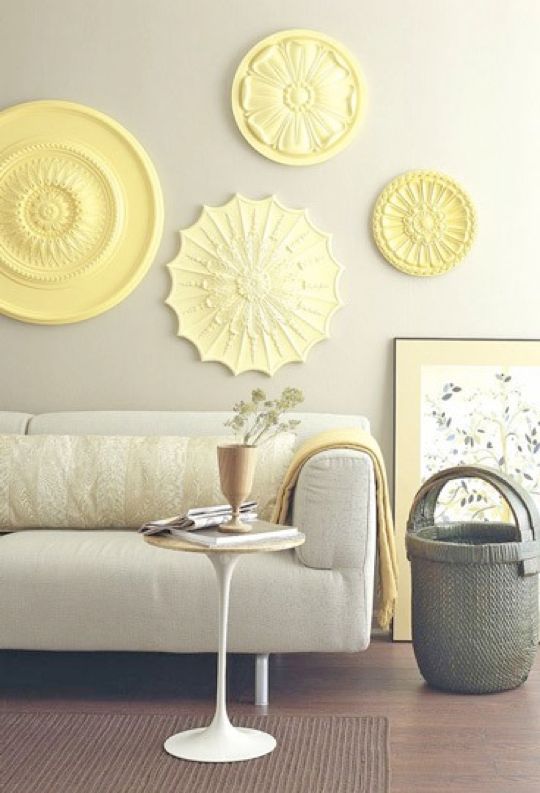 Combine pastel yellow with dark brown or black colors if you are looking for a contemporary and formal look. The mix of dark furniture with yellow accents is very elegant and could easily please to both, men and women. [caption id="" align="aligncenter" width="563"] 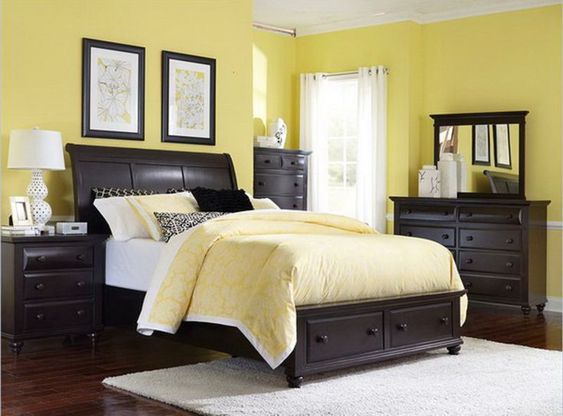 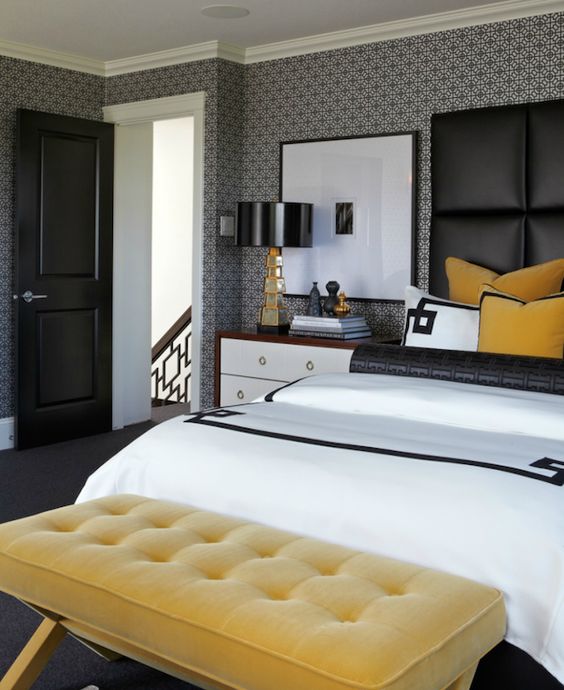 source: Pinterest[/caption] As you can see in the pictures above, both bedrooms are very sober. This sobriety is caused by the use of dark furniture. By adding some bright yellow accents, or yellow walls, both bedrooms will still look completely refined and luxurious. As you can see, yellow here adds the spark to the rooms to keep them modern despite the romantic furniture and accents. Tip: in order to paint a large room wall yellow, go for a softer hue. This way you won't feel trapped and overwhelmed. Designer Nina Gotlieb also recommends to " to paint large samples on the wall and view them throughout the day before you select your final color. Fluorescent lights especially can have a dramatic effect on yellow paint." [caption id="" align="aligncenter" width="435"] 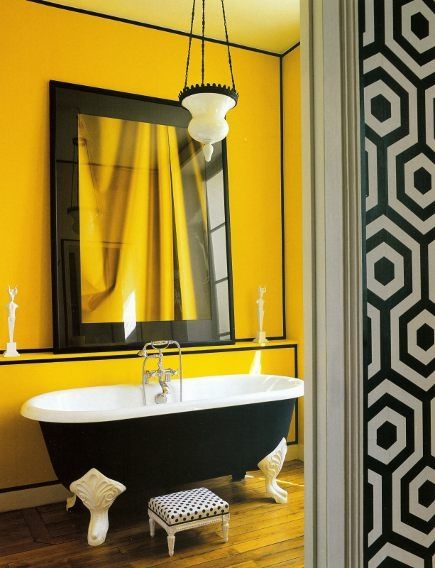 source: Pinterest[/caption] We said it before, yellow is bright and cheerful, like the sun. Combine it with nautic dark blue and white accents and you will have the most perfect sailing style room! Ahoy! [caption id="" align="aligncenter" width="564"] 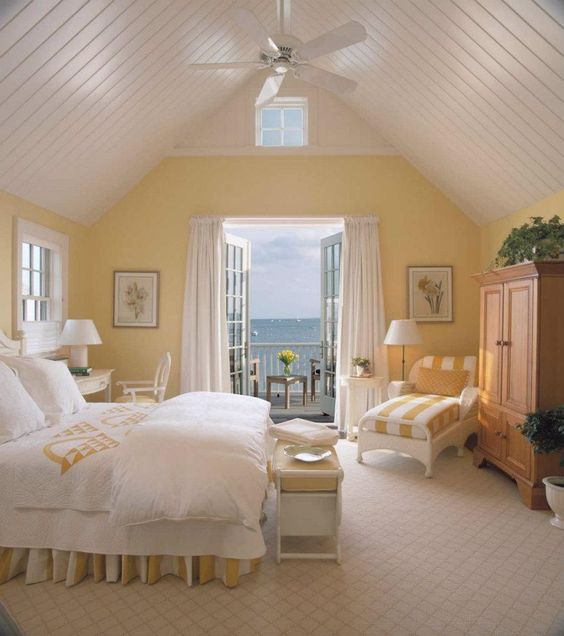 source: Pinterest[/caption] If you prefer a sophisticated yet beachy style for your vacation home by the coast, combine yellow with neutral tones, such as beige or white and add striped fabric (see above on the bedroom and the lounge chair). The room will still look very lively and fun with the right amount of elegance.

Go hard or go home. The following room decoration ideas are total moon enhancers. Bright colors are everywhere. This is a great idea for a guest room, as it will keep your guest cheerful and full of energy during their stay in your home. [caption id="" align="aligncenter" width="564"] 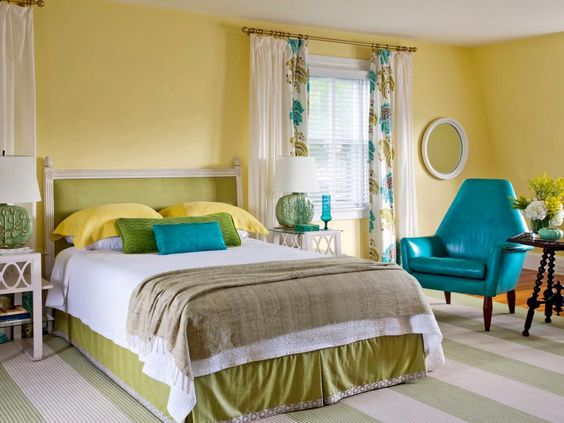 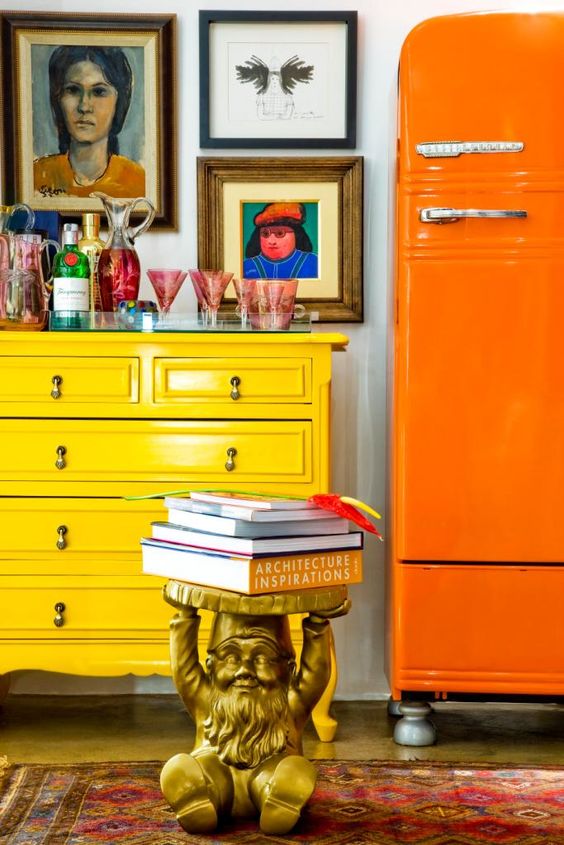 We previously saw the black + yellow combination of colors for a perfect mix of luxe and brightness. If you don't want to have such dark furniture or feel the contrast is too obvious for you, the alternative is white and yellow. This color combination is less aggressive and suits perfectly for smaller rooms, as both colors visually enlarge the room bringing tons of light to it. [caption id="" align="aligncenter" width="514"] 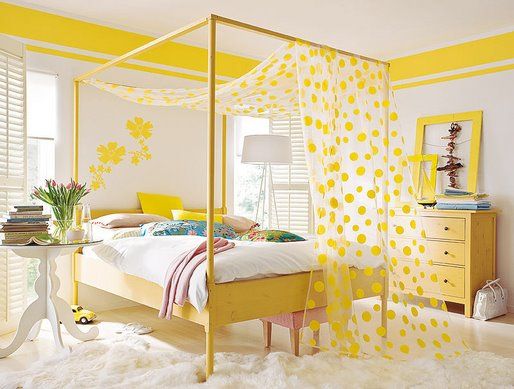 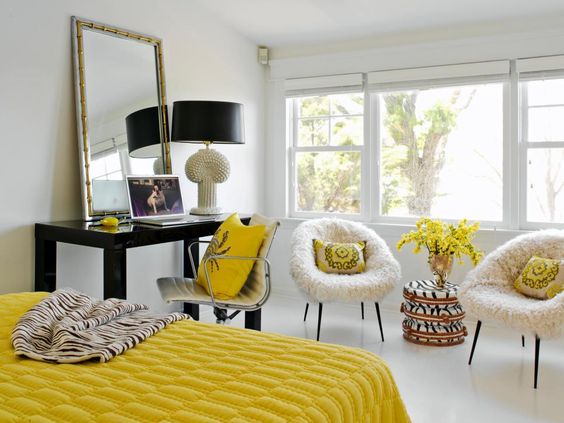 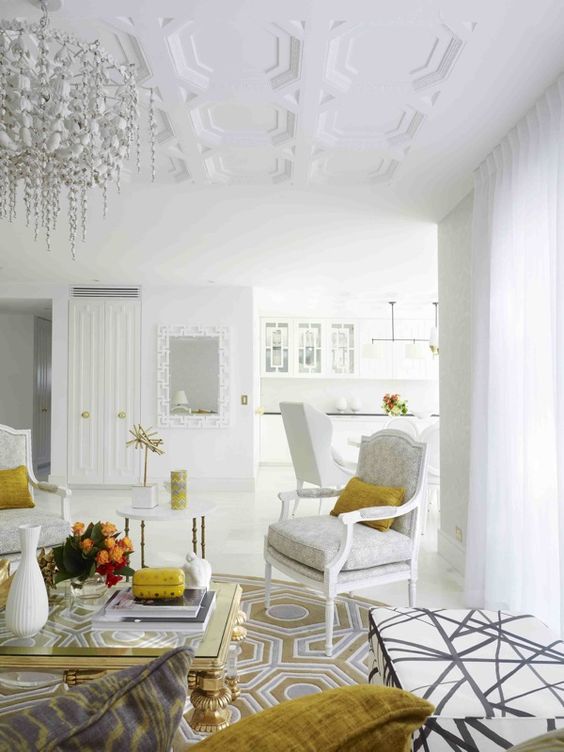 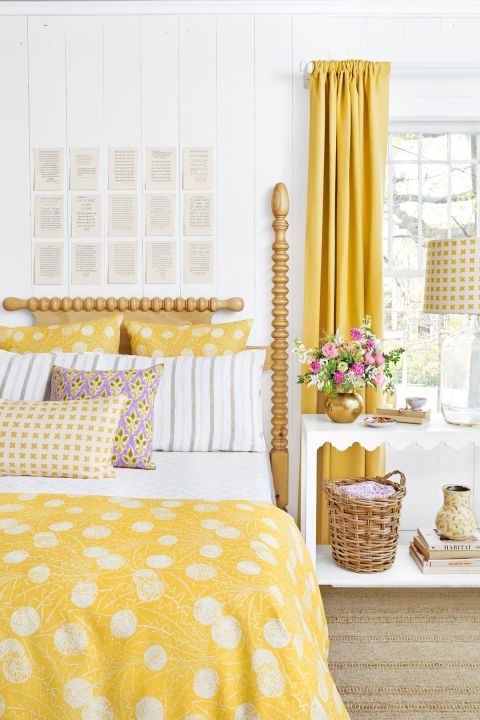 YELLOW FOR THE NURSERY ROOM

A perfect neutral color for your nursery room is... yellow! A yellow room is perfect for men and women. If you want to escape from traditional blue for boys and pink for girls nursery room, give yellow a try. However, avoid too much bright shades of yellow, which can be too energizing for the nursery. You can have a few accents in bright yellow, but it is best to avoid bright yellow walls. Instead, go for pale yellow hues or combine with other calm colors such as gray. [caption id="" align="aligncenter" width="564"] 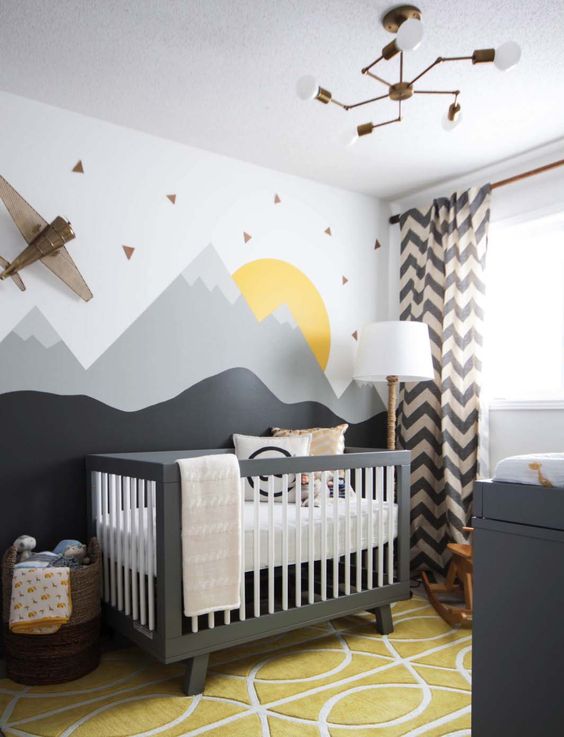 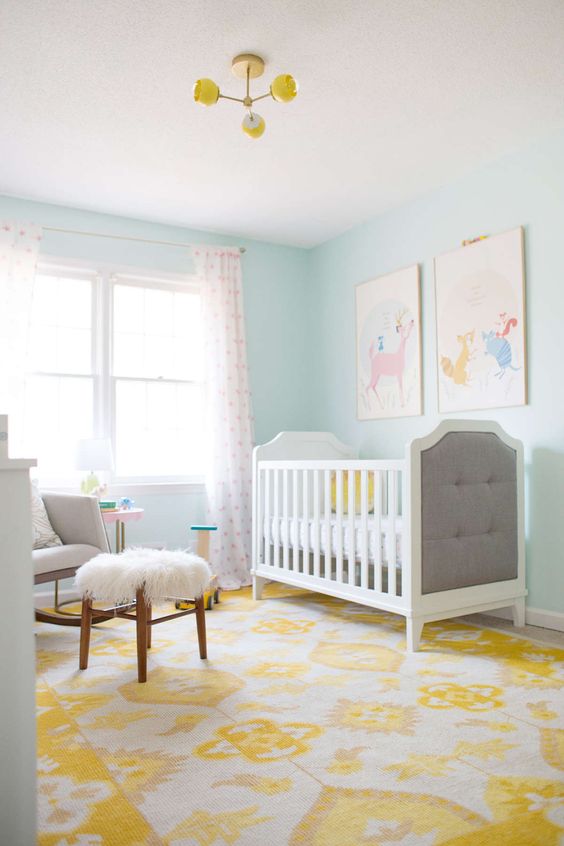 source: Pinterest[/caption]   How do you feel about yellow rooms? Would you give it a try? If you want to find more inspiring yellow room decor ideas for all the rooms in the house, have a look at our LANGRIA Pinterest board "Yellow Room Decor Ideas".